The arrival of a device that by the hand of Microsoft brings us closer to the use of the double screen in foldable format . In fact we have seen a lot of patents in this regard and the news that refer to conceptual designs are frequent.

And in the absence of knowing what Microsoft’s proposal is, if it finally materializes, here is the prototype presented by Intel of a dual-screen device running on Windows 10. A mix between computer and smartphone that responds to the name of Tiger Rapids.

The Tiger Rapids is a folding device that has two screens of 7.9 inches each which are joined by a hinge. Two screens that are not equal, well we can choose to use an LCD screen or choose the electronic ink that offers a significantly lower power consumption. 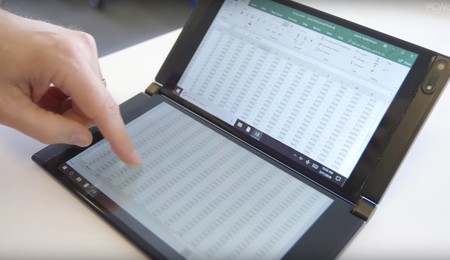 Inside it uses a Kaby Lake Core processor, SSD storage of which we do not know the capacity, connection through a USN Type-C port and all powered by a battery that offers a range of 13 to 15 continuous hours of use .

Of the Tiger Rapids the central hinge attracts the attention and is that far from those that we have been seeing , is very far from which we could hope for a terminal future of the hand of Microsoft. The union between screens is very wide and does not facilitate the use in a screen mode. It looks more like an electronic book.

The Tiger Rapids reminds us at first terminals already on the market how is the case of ZTE Axon M, which has been the first to make use of the double screen. The difference is that the Tiger Rapids is shown as a more refined product in terms of design ( a thickness of only 4.85 millimeters ) but that is clear, it is a prototype that we do not know if it will eventually become a reality.